I confess: I love power tools.


I loved my mother's yellow Mixmaster first, with the glass bowl that magically rotated one direction and then the other, a graceful dance that is absent from the hulking KitchenAid mixers of today. The Singer sewing machine was next - the Featherweight model that I wish I still had and that my quilting friends lust after - and I learned to use it at the age of four, sitting in my mother's lap with my hands on top of hers, perilously close to the piercing needle, gently guiding as the feed dog pulled the fabric beneath the presser foot. At around six or seven, I begged my father to show me how to work his power drill and, eventually, the Skil saw, which I did with strict supervision. By today's standards, though, my parents would probably be considered neglectful; from quite a young age, my sister, my brother and I regularly spent hours on end with no adult supervision at all. But using my dad's tools without permission and him close by was a sin punishable by weeks of early bedtimes and no allowance. Consequently, I quickly learned to put them back exactly as I'd found them.
One of the great things about growing up was acquiring my own tools. I bought my first sewing machine at 14 with money I earned from a two-week, 12-hours-a-day, 5-plates-at-a-time stint as a burger-wielding waitress in a food booth at the Calgary Stampede. At 16, my dad bought me a car for $35 at the police auction: a Nash Metropolitan convertible, red with a white top. The only problem was it didn't actually run. Rebuilding its engine became my mandatory summer project, my dad sitting on the porch with a beer in one hand and a cigarette in the other telling me which tool to use and what to do next, me cursing him under my breath. After endless hours beneath the hood and with fingernails that would not be clean for a month, I tightened the last bolt and got the nod to fire her up. It ran! That car would do 55 MPH flat out downhill with a good tail wind and it was thrilling. But every couple of hundred miles it would start missing and lurching and have no power at all. At last I bought a spark plug wrench, some screwdrivers and a crescent wrench or two, and as long as I kept the plugs clean it ran just fine. This is probably why, if I could be a character in any movie I would be Mona Lisa Vito - the Marisa Tomei character in My Cousin Vinnie - especially in the scene where she is on the witness stand in that fabulous backless purple dress and, with a little smirk and flick of the wrist, demolishes the prosecution's automobile expert witness.
But I digress. 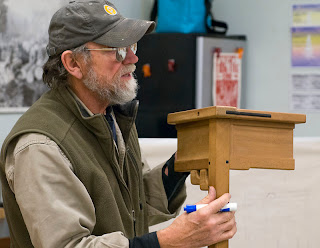 Monday starts with a brief surprise visit from Dan Packard, a craggy fellow with a salt and pepper beard, bottle-thick glasses and a well-broken-in ball hat, whom I know as one of the local early morning coffee guys. Tim introduces him as a meticulous craftsman, a university professor of sculpture and woodworking for more than thirty years, an artist, master carver, furniture maker and boatbuilder. You just never know who you're dealing with in this town.


Dan is here to talk about his approach to design, which he says begins with a medium that can be easily changed - paper or cardboard or sticks on the floor - so there's not too much investment of either money or effort. He grabs a roll of electrical tape and one of the cardboard mock-ups we were working on last week. With a twist of the wrist as delicate as Marisa Tomei's, he curves the tape this way and that across the cardboard surface, saying, "A line has energy in it. It will imply its continuation. Where is the line going?" As he talks, his hands draw pictures in the air. He speaks of light and shadow.  He says T-squares and triangles - which most of us used to draw our projects - are death in design.  After just a few minutes I am inspired and energized.
Here are some photos of Dan speaking to our class. 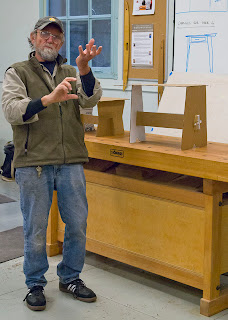 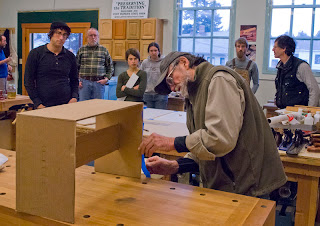 Power Tools
We are about to begin transferring our paper and cardboard designs to the boards we so lovingly purchased at Edensaw last week. This will involve multiple trips to the big power tool room and, though I don't much like the noise and having to wear a dust mask and ear protection, I find my heart beating a little faster.
Tim goes through the sequence that will make our rough boards flat and true - dimensioned lumber that will, by the end of the week, be looking more like benches or stools. Depending on the cuts each of us needs to make, we will gain experience with the jointer, planer, band saw, crosscut saw and the Big Scary Table Saw. I capitalize these words as I consider them to be the proper name of this tool, due to the evidence in this photo. 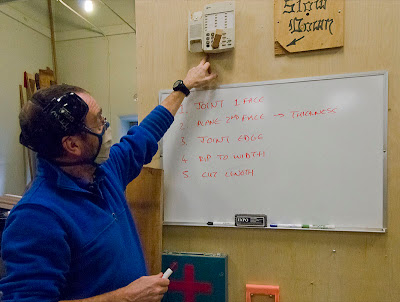 The chunk of wood protruding from the ex-wall-telephone did not grow there. It flew off the table saw and embedded itself, killing the phone, but luckily no humans. This phenomenon is known as kickback, and Tim emphasizes the procedures we absolutely must follow to minimize the risk of kickback happening to any of us. I'm pretty much convinced.
Here is Tim demonstrating the crosscut saw. 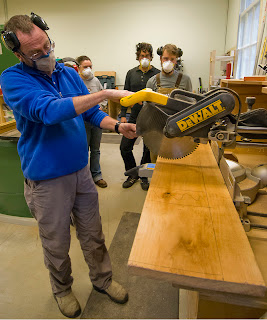 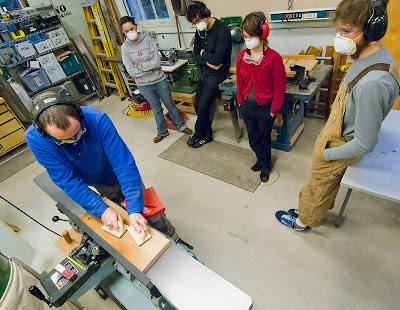 And the Big Scary Table Saw. 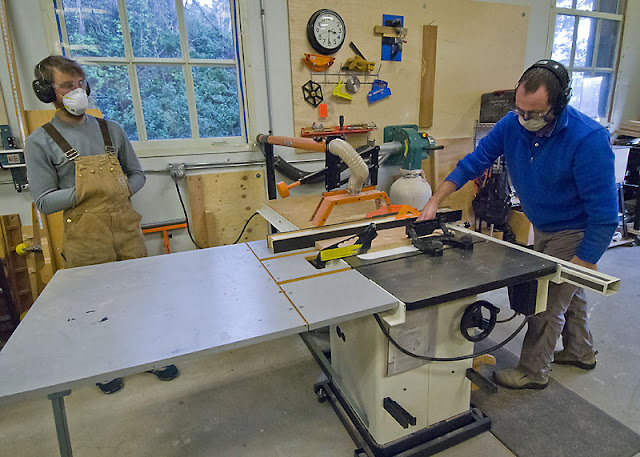 Quartersawn
I have chosen to build my small step stool from quartersawn white oak, eliciting a fair amount of eye-rolling and comments from Tim and Jim like, "You're going to be doing a lot of sharpening." Apart from the fact that I am particularly fond of its tiger stripey figures, the reason I chose this wood is that our kitchen island is made of it and the stool will be stored and used close by. We also have quite a bit of antique oak furniture in our house. I realize it will be challenging to work - especially the mortise and tenon joints that will join the top to the two sides.
I do have a backup plan, however - a Spanish cedar board that I acquired in trade for the walnut we needed for our winding sticks - and I'm having second thoughts about the oak. To settle my mind, I decide to cut a couple of pieces off the oak board and practice making a dovetail joint with it. This takes most of the day. But the result is acceptable - the best I've done so far. I decide to go with the oak and I am elated. Alex says he's going to call me "Quartersawn" from now on and I think it's an okay nickname. "Ol' Quartersawn." That's me. 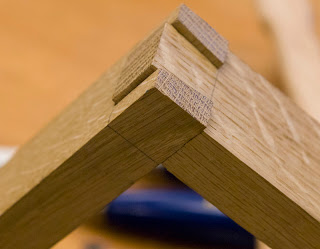 Posted by Dianne Roberts at 1:54 AM