There comes a time in most of my journeys - the novelty-has-worn-off, bloom-is-off-the rose, honeymoon-is-over time - when I find myself muttering “Why the hell am I doing this anyway?”
I first experienced this when hitchhiking alone around Europe in the late ‘60s. I didn’t have a plane ticket home to Canada. I was 21 years old and completely out of money, except for the “To Be Used Only in Case of Dire Emergency” Canadian $100 bill I had stashed inside my passport so I could bribe my way out of any real trouble. (Yeah, a hundred bucks went a lot farther back then, and they actually let you fly to Europe on a one-way ticket.) It was snowing – almost Christmas – and I had spent my last few dollars on a ticket in the lowest-class section on a jam-packed train traveling from Zagreb (in then-Yugoslavia) to London, where I had a friend whom I desperately hoped would put me up for a few days and help me find a job. It was something like a 36-hour trip with many stops and, being flat broke, I was resigned to going without food or drink. The compartment I was in was crammed with burly, dangerous-looking men smoking strong, hand-rolled cigarettes, and round, hairy-legged women in nubbly skirts with bulging shopping bags jammed into every available space on the floor. It would be impossible to stretch out, let alone sleep. No one spoke English. I missed my family and friends. I was tired, and afraid.
When sailing to the South Pacific, it happened in the infamous Intertropical Convergence Zone – the ITCZ – or simply “The Doldrums.”  The incessant hum of the diesel engine, the oppressive heat, the random gunshot of the drooping mainsail snapping violently from port to starboard with every  big swell, the unpredictable 30-knot squalls that would appear out of nowhere and force us 30 degrees off course – all drove us to near madness.
In the Himalayas it was the eight-day storm, the “We’re almost out of food and fuel, winter is closing in, not sure this is worth it, it’s getting hard to breathe and maybe we should go down even if the summit is so close.” time of push on or turn around.
I remember a story told by Mick Bird about rowing single-handed across the Pacific Ocean on the first leg of an epic journey that he hoped would eventually take him around the world. His 28-foot-long, six-foot-wide cold-molded boat, Reach, was a sleek and beautiful craft, designed and built here in Port Townsend by Kit Africa and Jim Franken.  It had a lovely, varnished rib across the edge of the cabin top in the center opening, right at Mick’s eye level. One day in difficult conditions somewhere in the middle of his 2000-mile journey, Mick had rowed hard and almost non-stop for 11 hours straight – at the end of which his GPS showed him to be two miles behind where he had started rowing that morning. In a fit of pique, he grabbed a Sharpie marker and scrawled “YOU CHOSE TO BE HERE!” in large letters across the shiny wood rib. Thereafter, he had to stare at those words every moment of every day, with every stroke of the oars.
This is my roundabout way of saying that, about three weeks ago, I hit the doldrums in my never-to-be-illustrious woodworking career. This – combined with the many life-tasks that so annoyingly refuse to hibernate while I amuse myself with planes and chisels and power tools – has made it difficult to maintain my energy level, let alone my weekly blogging schedule. Add to the list a serious case of spring fever, exacerbated by the never ending rain and wind and dark-again mornings (damn daylight savings time!) that has kept my masters women’s rowing crew, Tuf As Nails, off the water so far this season.
More than once I have reminded myself: “You chose to be here.”  But, while I am behind in the blog, I have continued to take copious notes and photographs in class and I intend to write more detail about all of it as time allows after the 12-week session ends.
Visits With the Masters
There have been truly remarkable days – from spending time in the workshops of some of Port Townsend’s finest woodworkers, to having some of them come to us as visiting teachers. Steve Habersetzer,  Jaap Romijn, Richard Inman and Robin McKann generously and encouragingly allowed us to invade their wonderful work spaces and shared their life’s work. Tom Dolese, of Terra Firma Design, taught a two-day session, revealing his hard-earned secrets of building beautiful and phenomenally comfortable chairs using precise loose-tenon joinery. Seth Rolland brought three days of out-of-square-chaos-is-fun revelation in the form of of steam-bending and shaping and laminating and vacuum bagging and generally coaxing wood to do all sorts of things it doesn’t naturally want to do. Dan Packard was here with his dozens of mirror-finish, razor sharp carving chisels which he allowed us to play with for two days of surface decoration and carving. John Markworth got down to the nuts and bolts (literally) of practical cabinet making techniques, introducing biscuit joiners, pocket screws and the wondrous capabilities of the Festool Domino, which is right up there with the band saw in my list of new favorite tools. 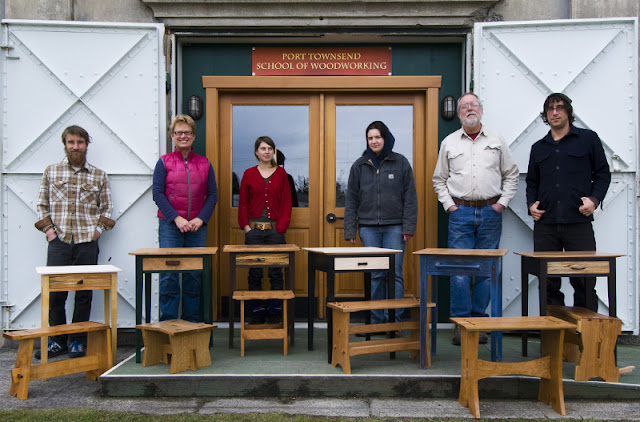 In days between, we finished our Shaker tables and have designed and begun working on our final projects: Alex is making a large tool chest, incorporating extensive hand-joinery, from several different local woods; Mark is doing a drafting table in hard maple, with circular, swing-out drawers;  Melanya has designed a desk-top stationery and writing cabinet with a variety of drawers and a tambour top; Justin is working on a sea-chest with a coopered top in multiple woods; Kia’s is a small, vacuum-laminated complex-curved bedside altar in local madrone with carved details; and I am oh-so-slowly bumbling along on a prototype for an outdoor bench (possibly to be known as “Dianne’s Folly”) that will sit on the upper deck outside the Maritime Heritage and Resource Building at the Northwest Maritime Center .
The Journey Continues
There will be no doldrums from here on. The trade winds have filled in, so to speak, and we’re cruising along above hull-speed. It seems impossible that the end of (at least) this leg of the journey is in sight.
By the way, after rowing for 64 days, Mick Bird arrived in Kona, Hawaii, and later continued to Australia and across the Indian Ocean to South Africa before abandoning his round-the-world quest in favor of being with his wife and young twin daughters. Our 1978 American team made it to the top of K2 and all returned home safely, after spending 75 days above 18,000’ elevation – something that is virtually unheard-of in the annals of mountaineering history. Our family, aboard our 53’ steel pilothouse ketch, Impossible, sailed from Port Townsend to Australia and back – an exhilarating journey of more than 20,000 miles – over a four-year period ending in September 2000.
And on the train from Zagreb so long ago, I gasped as men slipped scary-looking knives out of their jacket pockets, grinning at me sideways. Then shopping bags were opened and all manner of sausages and cheeses and bread materialized, was sliced up and passed from hand to hand (mine included), along with copious quantities of slivovitz swilled straight from the bottle. One of the Yugoslavs bribed the conductor so we wouldn’t get thrown off the train. Button accordions, mandolins and fiddles appeared and we partied for 36 hours straight, laughing and belting out Christmas Carols in English, French, Italian, German and several Eastern European languages I could not identify but sang in rather well. I arrived in London slightly hung over, hoarse, fatter than when I had left, and happier than I had ever been.
Once you get through the doldrums, it turns out, things can get really interesting.
(P.S. I will add more photos to this post tomorrow - please check back again.)
Posted by Dianne Roberts at 10:30 PM